This lesson reviews mathematical concepts of Boolean algebra and numbering systems to help you understand key functions of electric vehicles. First, we will analyze simple Boolean operators to understand how transistor and gate-based switching occurs in vehicles. Next, we will examine the similarities between the on/off operation of switches to the on/off system of binary numbering. Last, we will practice working with the binary and hexadecimal number systems used by the electric communication system in vehicles, called controller area network (CAN).

Many electronic systems are switched, not with mechanical switches, but with transistors arranged in series or parallel. A small voltage and current across two of the three leads control a large voltage or current across the output side of the transistor. 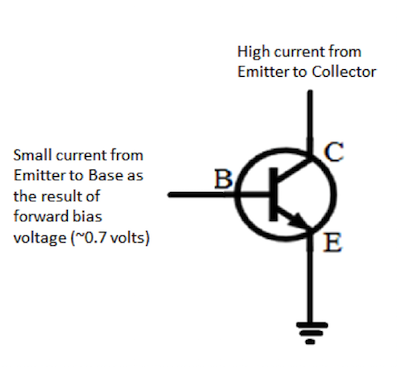 Figure 1. Schematic representation of a Negative-Positive-Negative (NPN) transistor used as a switch. CC BY 4.0 by National STEM Consortium.For the NPN transistor shown in Figure 1, a small forward bias voltage of about 0.7 volts, with the base (B) at a higher voltage than the emitter (E), controls a larger current from the emitter to the collector (C). If the emitter-base junction is not forward-biased, the emitter-collector circuit will not conduct electricity and is switched off. A transistor thus is used as an electronic switch or relay to avoid the arcing of DC current in a mechanical switch supplying current from a battery to a load. Such arcing could occur if a mechanical switch were used to control directly the current in the collector-emitter circuit.

In a gate, the state of two variables, A and B, is compared depending on the Boolean operator.

Now let’s look at the second Boolean operator, OR. A OR B is denoted as A+B. A+B can be TRUE if either A or B are true. Remember that TRUE is denoted as 1, and look at Table 2. The last three rows return of value of TRUE or 1, because in each case, A or B has a value of TRUE (1).

We can apply the rules of Boolean operators from Tables 1 through 3 to logic gates.

Figure 2. The analogy between Boolean logic gates and electrical switches. CC BY 4.0 by National STEM Consortium.Look at the top circuit in Figure 2. If either switch is open, the circuit is broken. In other words, the circuit requires that both switch A and switch B are closed, which is the same as the Boolean operator A AND B or AB.

Now look at the bottom circuit in Figure 2, which is configured differently. This circuit requires only that either switch A or switch B are closed, which is the same as the Boolean operator A OR B or A+B.

The usefulness of this concept is shown in the following example. Consider a circuit that warns a driver if the headlights are on and the driver’s door is opened. This circuit could use two inputs to an AND gate:

To output a 1 from an AND gate, both systems must output a 1. Let’s visualize this in a truth table:

If either input is 0, a 0 will be output. The output of the AND gate can control the on/off state of a transistor with a light or alarm on the output side of the transistor. Thus, if the driver exits the vehicle with the lights on, he or she would be warned that a dead battery could result if the lights are not turned off. Figure 3 depicts the same AND gate as a logic diagram.

Figure 3. AND gate with two inputs. CC BY 4.0 by National STEM Consortium.Read this webpage to learn more about logic diagrams, Boolean algebra, and truth tables:https://drstienecker.com/tech-332/3-logic-circuits-boolean-algebra-and-truth-tables/

It is easy to combine gates with more that two inputs by doing a bit-by-bit comparison. In each of the examples below, 0 denotes FALSE or OFF while 1 denotes TRUE or ON.

Why? Because none of the comparisons (of the top and bottom numbers) contains 1 AND 1. Therefore, every value is 0.

Why? Because every comparison of the top and bottom numbers contains a 0 OR a 1. Therefore, every value is a 1.