Find out where DIYguru grads get placed. > Get our Placement Stats
Book Your Free Trial, Now >
Reading:
D.C. MOTORS Explained
Share this:

The Principle of the DC Motor

DC motors, like generators, are classified into three categories based on the connections of the field winding to the armature:

The field winding is connected in parallel with the armature as shown in the above figure.

Characteristics of the D.C. Shunt Motors

We know that in a direct-current (d.c.) motor,
Armature torque is directly proportional to flux and armature current.
Ta  Flux *Ia
Because the motor is powered by a constant supply voltage, the flux is constant.
Armature torque is directly proportional to armature current.
Ta  Ia
As a result, as shown in Fig.2, the Ta/Ia characteristic is a straight line passing through the origin. The shaft torque (Tsh), which is less than Ta, is represented by a dotted line. The curve clearly demonstrates that a high current is required to start a heavy load. As a result, starting a shunt motor under a heavy load is not preferred.
N/Ia Characteristics
The speed N of a motor is given by
Speed is directly proportional to flux and back e.m.f. Eb.
N  Eb/Flux
Under normal conditions, the flux and back e.m.f.Eb in a shunt motor are nearly constant. As a result, as the armature current varies, the speed of a shunt motor remains constant, i.e. (dotted line AB in Fig. 3). It is clear that as the load increases, Eb = V-(Ia*Ra) and flux decreases due to armature resistance drop and armature reaction. It means that the motor’s speed decreases slightly with a load (line AC).

Characteristics of the D.C. Series Motors

A DC motor is made up of the following components:
Yoke:
It is the outer part of the DC motor that supports the field poles, serves as a cover, and serves as the path for pole flox.
Field Poles:
It is made up of field windings, a pole core, and a pole shoe. To reduce eddy current, the pole core and shoe are laminated. The pole core is used to support the field winding, the pole shoe is used to evenly distribute the flux, and the field winding generates the North and South poles using the current passing through it.
Armature:
It is a component of the machine’s rotating element. It is made up of a core and an armature winding. The armature winding is housed in this core. To generate electromagnetism, armature windings form a coil.
Commutator
The armature coils of the DC machine induce an alternating e.m.f., and commutators are used to provide direct current to the armature. Commutators are made of copper and are separated from one another by mica sheets. Each commutator segment is connected by armature coils.
Brushes:
Brushes are made of carbon or electro graphite, both of which conduct electricity. They deliver a direct current supply from an external source to the commutator. The main disadvantage of DC motors is that they can produce spark as they rub against the commutator.

When the armature of a direct current motor rotates under the influence of the driving torque, the armature conductor moves through the magnetic field, causing e.m.f. to be induced in them as in a generator. Back e.m.f. Eb. is the induced e.m.f. that acts in the opposite direction to the applied voltage V (“Lenz’s Law”).
The back e.m.f. Eb. = (P N Z/ 60 A) is always less than the applied voltage V, though the difference is minor when the motor is operating normally.

Significance of Back E.M.F.

The presence of back e.m.f. causes the d.c. motor to self-regulate, drawing only the amount of armature current required to develop the torque required by the load.
𝑉 = 𝐸𝑏 + 𝐼𝑎𝑅𝑎 + 𝐵rush drop
Armature current, Ia = V-Eb/Ra
When the motor is on no-load, a small torque is required to compensate for friction and windage losses. As a result, the armature current Ia is small, and the back e.m.f. is close to the applied voltage.

As a result, it follows that the back e.m.f. in a d.c. motor regulates the flow of armature current, which means it changes the armature current automatically to meet the load requirement.
Voltage and power Equation of D.C. motor

Advantages and disadvantages of DC motors:

The MATLAB software is based on the MATLAB programming language. The MATLAB application is commonly used to execute text files containing MATLAB code or to use the “Command Window” as an interactive mathematical shell.
Mat-lab includes some crucial syntax.

To analyze the data, use the following code.

Analyzing data for the below d.c. motors
Example 1:

The slope of the torque vs speed chart is downward, as shown by the graphs of different models of DC motors above. This downward slope is a characteristic of a DC motor, which produces high starting torque at low speed, indicating that these motors are suitable for traction-based applications.

The perfect, meticulous, and extremely impressive electric motorcycle based on the BMW HP Kunst Hydrogen Concept model is designed entirely by the “hand” of a student of Mechanical Engineering at Tra Vinh University. 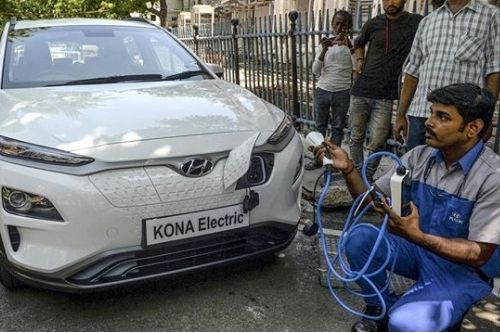